Crime In Hong Kong - An Introduction 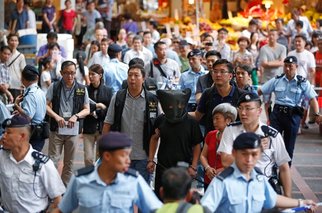 Hong Kong is a safe place. Recorded crime has shown a steady and sustained decline over the past 10 years, with street crime and violent crime seeing significant drops. By comparison, Tokyo has a higher crime rate, whilst Hong Kong is far safer than London or New York. Official crime statistics are here.

Comparisons between cities with similar crime rates is a futile exercise. Differing counting rules, classification of crime and procedural issues make direct comparisons meaningless. Thus, comparisons with such places as Singapore are academic.
But, murder is one crime that had pretty consistent counting rules across borders. Chicago in the USA has about half the population of Hong Kong. In 2014 the Chicago Police recorded 390 murders, whilst Hong Kong recorded 27. New York has a murder rate about 10 times of Hong Kong, with London recording four times the homicide cases.

This does not mean that Hong Kong is crime free. Far from it.  At certain times of the day, in certain places,  precautions are wise. Pickpockets do take advantage of busy areas. Although most street crime, such as muggings and the like, are few having been driven away by high profile policing.  Varies social-economic factors also help keep such crimes in check.

These days Hong Kong rarely sees a gun crime. This was not always the case. During the 1980s and early 1990s, we experienced a spate of high-profile bank and goldsmith robberies.  The bad guys used AK47s and Black Star pistols. Most of the culprits were ex-soldiers from a down-sizing PLA or Mainland criminals looking for a quick lucrative payoff in Hong Kong. A few gun battles took place, entering Police folklore.

These cases drove a swift change in police tactics, improvements in firearms and kit. The Mainland Police helped with tighter border controls. Since then gun crime has ceased to be a concern. Draconian gun control laws and tough penalties drove home the message. The relentless pursuit of those suspected to have illegal firearms has paid off.

With private ownership of guns controlled through clubs, access to a firearm is subject to tough enforcement.   Thus, the weapon of choice for gangs in Hong Kong tends to be the beef knife or chopper.  But more about that later when I discuss the Triads.

Late-night violence associated with drunkenness is an issue. Focused in the bars area, the level is much lower than in Western countries. Hong Kong generally has less aggressive, laddie-lout behaviour. Culture is a factor. For example, the UK yob culture is not evident in Hong Kong.  Yet, alcohol-fueled boisterous behaviour on occasions over-develops into something serious.

So which crimes are a concern?  It is probably true that petty theft is under-reported. This includes theft of mobile phones, wallets and other items that can generate quick cash. Most of this is opportunist petty criminals exploiting the public’s carelessness and inattention. Simple crime prevention measures go a long way to stopping this. Restaurants providing covers for jackets on the back of chairs cut thefts from diners. Remaining alert and not leaving property unattended, even for a few seconds, is good simple advice.

Burglary of low-rise flats and houses in rural areas has attracted attention lately. Areas such as Sai Kung and the fringes of Shatin have seen a spate of burglaries targeting homes holding high-value items. The culprits are professionals, working in a coordinated effort, with look-outs. These guys will be trying to find items that can be turned into cash, either by sale on the black-market in the Mainland or overseas. Again, a few simple security measures help. Making sure windows and doors are secure makes the criminal life harder. Having a community watch scheme is a cheap yet effective option. Neighbours keep their eyes open to strangers or any unusual activity. This provides a robust deterrent. Opting to keep large quantities of cash or valuables at home is an invitation to the criminal. So minimise your risk.

There is a great deal of nonsense spoken about Triads. Propagated by movies and TV, this often seeks to glorify them.  Their exploits and influence are certainly exaggerated. Much of this is hype. But, let's be clear, they are a serious threat to law and order. Their influence can be detrimental to social order and they do terrible things. Nonetheless, they are criminals who can be defeated. Also,  the public image, as portrayed in the movies, bears little resemblance to the grim reality of their existence.

The flashy cars and pretty women are accruements that few triads can afford. In reality, except for a few who have made the transition to respectability, most triads are under-achievers. Socially inept losers they exist on the fringes of normality. They live a precarious existence that lacks stability, as they face the constant threats of rivals on one side and the Police on the other. Life expectancy is low, plus the hours long.

The public perception of the unified Triad group, working under the control of a Dragon Head, is no longer true. In the relentless pursuit of money and power Triads have morphed. Several of the major Triad groups no longer have a Dragon Head.  They have fragmented into sub-groups with loose loyalties in the shifting world of crime. Factions of the 14K will cooperate with Wo Hop To, whilst within the Wo Sing Wo, rival groups will dispute over a nightclub. The traditional single allegiance to a group, with it titular Dragon Head is not prevalent. Thus central control of strategy is not there.

The pursuit of profit, by all means, is now at the core of Triad thinking, with old alliances dropped if there is money to be made. The other factor that changed the activity of the Triads is the opening up of the mainland. This, plus the expansion of gambling activity in Macau shifted their focus.

Most of the smarter Triads soon realised the potential of Macau. With the large American casinos moving in new opportunities arose. With rich pickings on the fringes of legal gambling, these Triads switched their activities out of Hong Kong. Loan sharking, debt collecting, prostitution and money laundering are lucrative. Providing a bit of muscle when needed, also proved helpful. Meanwhile, on the mainland, a flourishing nightclub scene provided endless possibilities.

A recent clampdown on private gambling junkets in Macao has hit cash flows. The speculation is that some may move their activities back to Hong Kong.

With the intelligent, better organised, triads shifting their focus from Hong Kong, this was not a positive development. What remained behind in Hong Kong is the less astute. No longer tightly led factions engaged in fights to settle disputes.  In their ignorance, they attracted more police attention. I’m aware of instances when triad members lacking firm leadership engaged in petty disputes. These culminated in serious violence that caused despair to their more experienced elders. In the past, such trivial matters would be settled by compromise. When a 14-year-old girl switched her affections from a young member of the Wo Shing Wo to a guy from the 14K, trouble started.  A three-day running fight developed that left five people hospitalised. Hardly the stuff of ‘The GodFather'.

So what crimes are on the rise. Cyber crime is seeing a rapid increase as criminals exploit the public's carelessness and naivety. Few of these instances are sophisticated efforts to deceive. The victims can avoid trouble by the simple precaution of knowing who they are dealing with.  Also, if any offer to do business or buy something at a reduced price sounds too good, it is. These scams rely on the greed, naivety and plain stupidity of the victim.

Deceptions, including over the telephone, have seen a rapid rise. More and more elaborate techniques appear. These deceptions exploit the victims fears over family safety, their emotions and superstitions. Some 15 years ago deceptions started with the targeting of old people with claims about ghosts. The culprits, often working in groups, duped the victims into handing over large sums of money to exorcise the ghost. Instances of victims handing over $200,000-HK were not unknown.

These schemes developed. Victims received telephone calls alleging a family member is held by loan-sharks or the Mainland police. Access to bank accounts is demanded for their release. Most of these cases initiated by Mainland criminal gangs, who provided training to culprits.  Coaching in the best techniques to hook victims took the enterprise to a new level of sophistication. These crimes could prove lucrative.  Millions of Hong Kong dollars transferred to the gangs, usually by remittance companies.

The power to convince the victims was so compelling that in one case an old lady paid over $300,000-HK to release a son allegedly held by the Mainland police. This is despite the fact she knew he was at college in the USA. In another case, a lady paid over money to get back a son she didn't have. She later explained to me the culprits may have called the wrong person and she didn't want a mother to suffer.

The escalation in deception cases has continued. The culprits are now setting up fake Mainland Government websites to publish the details of their victims.  Payment is sought to release them from the threat of arrest on bogus warrants. Despite widespread publicity, people continue to fall foul of these deceptions. Educating people that the Mainland government doesn't operate in this manner must continue.
​
Having said that, it is inevitable that the methods used by these gangs will evolve as they seek new techniques to ensnare their victims.  The banks and remittance companies have a role to play in spotting victims and suspicious transactions. In my experience, bank staff have proved most proficient in this regard. Intervening to stop transactions they've allowed the police to get involved early and develop leads. These efforts must continue as the social costs of these crimes is terrible. Victims, including old folks, have committed suicide.

These deceptions play on people’s vulnerabilities. Carefully crafted social engineering manoeuvres the victim into handing over cash. Praying on ladies with desires for a relationship is the latest trend. The scale of this criminal enterprise is staggering. It’s something I’ll cover in a separate article.

Bottomline - Hong Kong is one of the safest large urban conurbations. The orthodox crimes of robbery and burglary are now exceptions, whilst computer related and facilitated crime is the new norm.

In later articles, I’ll talk about the triads, the rise of deception cases, also the fraught matter of public order duties and protest.
Triads