"Would you shoot somebody?"

"The testing ground of true leaders", trumpeted the advert. A dashing European inspector with a Chinese constable posed in the bright lights of Kowloon. That looks like fun.

Another advert promised a hectic social life, always an attractive offer. So I soon filled in the application slip from the back of Sunday Times. Then the invite arrived for me to attend an interview at the Hong Kong Government Office in Grafton Street, London.

I got on my suit, polished my shoes, sorted out a tie and headed south. I navigated from King Cross Station to Grafton Street using a map ripped from an old atlas. It's October 1979.

On arrival, shepherded into a waiting room with about ten other chaps; I noted most appeared older than me. It was clear that one or two were serving UK police officers. But, as I surveyed the room, I began having doubts.

First, I knew little or nothing about Hong Kong. Second, my morale hit the floor when someone mentioned training in Aberdeen. I knew Scotland well and did not fancy nine months up there, especially in winter.

Then into an interview. Before me sat Ms Annie Calderwood, a recently retired senior superintendent. On one side was Dick Lidster, a serving superintendent and on the other, a man from the Foreign and Commonwealth Office.

After introductions, I'm invited to speak about my interests. I'd rehearsed this. I covered the Duke of Edinburgh Award Scheme, adventure training, boxing and my dodgy academic results. Finally, I offered up that I was bored with education and seeking adventure and a challenge.

"Would you shoot someone?" Ms Calderwood asked. Bloody hell, I did not see that one coming.

"Yes," I blurted out. "Well, it depends on the situation." Nice recovery.

"I presume the training covers that, rules of engagement and such. But yes, if my life or that of another was threatened." The knowing nods from the panel. I'd aced that one.

"What about the Chinese? Can you get along with Chinese people?." Lidster was now asking the questions.

"Well, Sir, I did share a room at University with a Malaysian Chinese student for a term. We got along fine." More nods of agreement. The FCO chap asked nothing.

For the next 20 minutes, Ms Calderwood lectured me about Hong Kong. She took in the place's local culture, food and unique status. I left the interview feeling that that went well.

Next, I was presented with a map and directed to visit three locations for medical screening. A test, I thought—urban navigation or something similar. At the first stop, a chest X-Ray, the second a hearing and eye test, and the third a range of motion exercises.

I'm disappointed that no one tried to ambush me on the route. Occasionally, I'd ducked into doorways to ensure no one was following me.

Next, back to Grafton Street to complete some forms, claiming a travel allowance in the process. Not bad. I'd had a paid job interview. I headed home, not expecting much.

Several weeks later, I'm called back to Grafton Street. More interviews and testing, no doubt. Arriving mid-morning, I joined about 20 other candidates for a lecture on Hong Kong. A movie follows, covering the work of the police. By lunchtime, Dick Lidster suggested we head to the pub down the road.

Wanting a clear head, I paced myself having only one beer as I anticipated another interview. Lidster and a couple of the others were getting stuck into the ale. Lunch dragged on with Lidster telling us stories of his adventures in Hong Kong.

Eventually, we headed back to the office. Next, a serving inspector on leave in the UK gave a talk, answering our questions as a boozed-up group struggled to stay awake.

One by one, we're called out of the room. Here it comes, I thought. More tests or bad news. A female Chinese clerk asked me, "When can you leave for Hong Kong?"

"Sorry, is the next stage of interviews in Hong Kong?" I'm confused.

I did some quick thinking as Christmas is approaching. "Early next year, I suppose."

"OK, you start at the end of March. I'll send you details by post."

Stunned. I took three questions at the interview. I was heading to Hong Kong to train as a police inspector. Several years later, in Hong Kong, I served with Dick Lidster. I asked him why he'd recruited me.

"You had a smart suit, polished shoes, a tie with a decent knot and seemed like a confident lad. Although, I was a bit concerned you didn't drink." 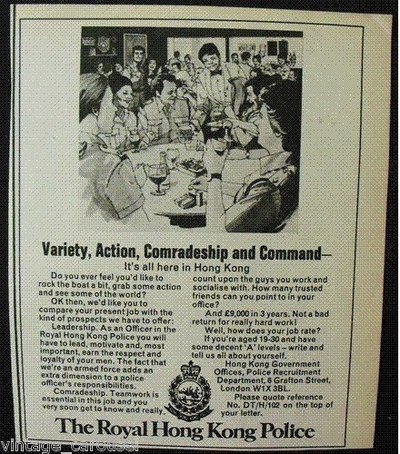 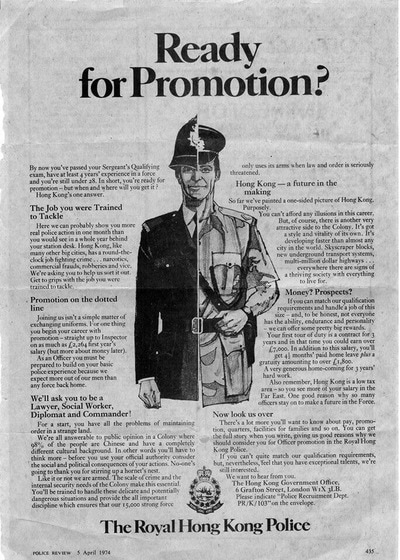 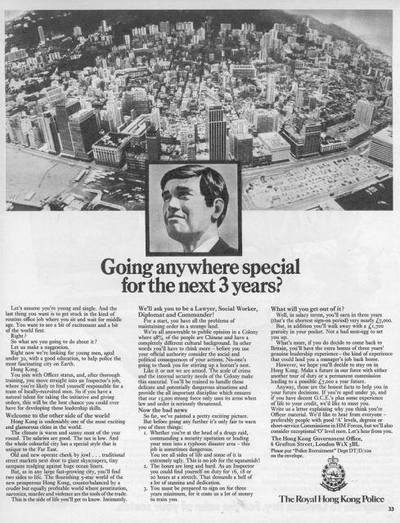 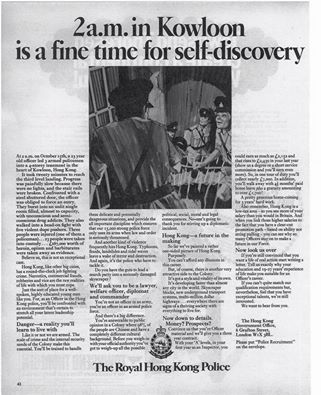