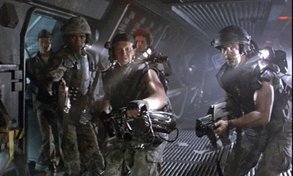 I’m torn between Alien and Aliens. Let's face it, nothing compares to the chest-bursting scene in Alien. Plus scrambling along corridors and passageways hunting the creature rattles my nerves. You’re soon asking the question “Who is hunting who?”

​But Aliens goes for a full-on confrontational approach.  It's pumped up … “Game Over, Man, Fucking Game Over”.

So on balance, I’ll opt for Aliens. The story … drifting in deep space Ripley is in suspended animation for 57 years having fled LV 426. Rescued, she is held to account for the destruction of the Nostromo. Struggling with flashbacks, a duped Ripley agrees to go back to LV 426 after contact is lost with a colony of terraformers. Accompanied by gung-ho Colonial Marines, plus the bogeyman company representative, Burke. An android, Bishop, is on the crew earning Ripley’s immediate suspicion.

Lets cut to the chase. The terraformers are being held captive by the aliens.  Used as incubators for new offspring. Newt, a young girl, has evaded the aliens.  She is not too keen to see the new arrivals, fearing they will expose her to danger.

The Marines get their butts kicked trying to recon the alien hive in a reactor building. They only escape with Ripley stepping forward to drive them out to safety. Plans to flee the planet get thwarted when the dropship crashes. Holed up in the command centre of the colony, the Marines must fight off a determined assault by the aliens. Meanwhile, Burke is working to get an alien to Earth for the companies weapons division. He also informs everyone the earlier battle in the hive has damaged the fusion reactors. Detonation is due in hours.

Burke tries to get Ripley or Newt impregnated by an alien face-hugger. His comeuppance soon arrives. Captured by the aliens, he is now a host. Newt is also taken. Meanwhile, a rescue craft is summoned from orbit by Bishop. Ripley refuses to leave Newt behind. She goes back to hive in search of her. There she confronts the alien queen by destroying her eggs. Fleeing with Newt, the queen gives chase. They make their way off the planet with the queen hidden in the landing gear of their craft. The hive explodes as the fusion reactors overcook.

The queen emerges from hiding, rips Bishop in half and then goes for Newt. Ripley ejects the queen into space. The survivors then enter suspended animation for the journey home. Time to catch our breath.

A couple of themes run through the movie. The corrupt multi-national company that will go to any lengths for profit. No need to point out who this is aimed at. Take your pick. The Marines are over-confident and over-bearing. They wear gear that has a distinct Vietnamese war era feel. Even the drop-ship uses the cockpit of a Huey attack helicopter as its inspiration. Getting their butts kicked by a non-technological enemy is a throwback to the Vietnam war​

Encompassing the whole narrative is Ripley’s maternal instincts towards Newt. Ripley seeks to protect her. She even goes back to the location of her worse nightmare to rescue Newt. The strong women thread builds from Alien. It’s taken to the next level in Aliens. All I know is that I want Ripley on my side.