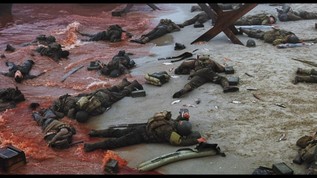 Carnage, mayhem, unrelenting slaughter for the first 20 minutes places this movie on the list. And its places you on the beach with soldiers. It’s visceral and tactile. You feel the hits, the explosions and get carried up the beach towards the German positions. A soldier staggering around holding his blown off arm drew laughs from young guys behind me. I turned in anger at their inappropriate reaction to find faces contorted in horror. The laughter an uncontrolled expelling of air. My wife was below the seat taking cover. With 1,500 extras the reenactment of the Omaha beach landing was stunning.
​
After that opening salvo, the movie settles to the search for Private Ryan. With his brothers killed in action, the top brass are keen to get Ryan home given the sacrifice his family has made. I know the story is not accurate, whilst the portrayal of events is augmented for dramatic effect. The role of the other Allied nations gets ignored except for a tiny dig at General Montgomery.

Whilst searching for Ryan the dynamics in the group of soldiers are explored. Captain Miller, played by everyman actor, Tom Hanks, keeps his battle-trauma in check. He plays a game of ‘guess who I am’ with his men only to reveal his background at a critical moment as a distraction.

At times the pacing slows, but never enough to drag. You’ll always remember those first 20 minutes.
Next Page