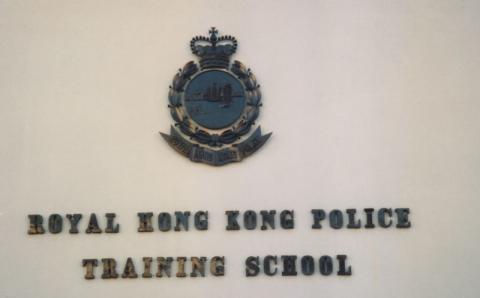 Back at the Police Training School, the first hurdle in my journey to qualifying as a police inspector was the dreaded Cantonese course.

Two months of classroom work with only the odd physical training session and a bit of foot drill to break up the day.

Kitted out in khaki shorts and tops, we looked like tidied up extras from "The Bridge on the River Kwai." As we marched to lessons each day, I'd whistle "Colonel Bogey."

As we struggled with Cantonese, the locals undertook a separate set of training, including some community work, adventure training and English lessons.

To the untrained ear, Cantonese can sound like an assault on the senses. The tones all sounded the same to me until gradually I could make some distinction.

​Singing helped. Except my singing is tuneless. Thus, I tested the patience of my instructors.

Having said that, it was surprising how we soon picked up the swear words, plus an ability to order alcohol and food. But, of course, being something of an accomplished mimic, that was my strategy.

Soon my colleagues and I were making steady progress, although fluency was some way off. Nevertheless, we had enough to get by and impress the local girls, or so we reckoned.

It was mandatory to pass the Cantonese oral exam after the course. After that, you can move on to the law course. But, in a shocking development, I managed a credit.

​Having gone from zero understanding to some passable sentences in two months was an impressive achievement. In addition, my Cantonese continued to improve, with my future postings proving a significant impetus.

Having completed the Cantonese, we now joined the local officers for the law course. And for the first time, we were also let loose on the range with guns.

Starting with the Colt .38 Revolver, this peashooter was only a threat at close range, and even then, it had no stopping power. The Force replaced the Colt in the 1990s with the Smith and Wesson .38. This weapon came with impressive hollow point bullets.

We later got our hands on the Sterling Sub Machine Gun, AR15 rifle and the Remington Shotgun. My revolver shooting was OK, but the Chinese ladies on the course seemed to excel. Note to criminals, never try to run away from a Chinese lady police officer with a pistol. She will hit you centre mass, no trouble.

The Sterling was fun to fire, although somewhat unruly. Short bursts were necessary, or the rounds would be flying skyward as the barrel tended to climb. Not something you'd encourage in high-rise Hong Kong.

I'm no gun-nut, yet my favourite weapon was the AR15. This semi-automatic version of the M16 is easy to operate. It's accurate, with my shots going where I aimed them. Always something to I'd recommended in a weapon.

As the law course rolled along, I learnt the various offences, judges rules, statement-taking, evidence collection and handling. Next came briefing techniques and operational planning. Then we simulate a drugs raid or other taskings.

It was all makeshift as our classrooms doubled as the vice dens; the cricket pitch was a murder scene. These days officers go through a tactical training complex with mock streets, apartments and actors. Gradually it dawned on me that the practical aspects of the job are to be learnt on the streets.

Invited to the front of the room, the unfortunate victim must explain what offences may have occurred on screen. Throughout, I was thinking of very old Nuns with facial hair. That held things in check.

Except for a few bumps in the road with stage exams, I did well on the law course. Then in a late surge, I scored amongst the highest of my class. Yet, it wasn't all plain sailing. I found the 'bullshit' tiresome. A few of the instructors came across as petty tyrants. For example, I won a bottle of whiskey on the games night, then faced discipline for keeping it visible in my room on inspection.

Later, I appreciated that some 'bullshit' was necessary to get attention to detail and test our ability to deal with frustrations. Plus, my occasional outburst against the system got me confined to camp at the weekends. Although, I was wising up by learning to keep my displeasure under wraps.​

Gated and Getting in Shape

Confinement to camp or 'gating' is the standard punishment for whatever infraction the instructors invented. It's a pain.

​It meant remaining in uniform all day, then reporting to the Guardhouse every hour for inspection. The process went on until midnight, after which you stood down until 7 am the following day.

One Saturday on 'gating' after the last inspection, I was over the fence, into a taxi and downtown. Wanchai, here I come.

On the return trip, slightly worst for the drink and emboldened, I breezed through the main gate and was spotted. Another 'gating' resulted ... which I deserved.

As the course progressed, my body shape began to change as the weight dropped off. Regular exercise, the heat and the general running around were having a positive impact. For me, the worst of the physical training was the run over Brick Hill mid-afternoon.

With temperatures in the mid-30s and humidity at 80%, this proved a gut-buster. The Brick Hill course follows the service steps for the Ocean Park cable car. You climb nearly vertically to a high point 800 feet above sea level before dropping and rising again.

The last leg is a steep knee-grinding descent down to Aberdeen and a return to base. Brutal is the only word to describe this route.

On our early attempts, we had to walk, crawl and half-run. Our fitness wouldn't allow anything else. If done after lunch, you knew you'd see the food again. A few people collapsed.

Feigning exhaustion, some would drop out. Later, I became a decent runner at the Police Tactical Unit, although I never mastered Brick Hill. It was too much for me, and even now, I dread the thought.
​
Besides our course instructor, we had a mixed group of staff taking responsibility for us. The DMIs handled the foot drill and firearms training. The PTIs tortured us. These guys were relentless; while our drill instructor morphed into a decent bloke, I was always ambivalent about the PTIs.

Often dismissed as nonsense and an unnecessary waste of time, foot drill has its purposes. It brought us together as a group, instilled esprit-de-corp and proved the quickest way of getting people from A to point B in an orderly manner.

​Yet, the real merit of foot drill came home to me at the Police Tactical Unit. The discipline it imposed allowed officers to overcome their fears when faced with a hostile situation. By exhibiting purpose and resolve, even without firing a shot, you dominate a hostile crowd. 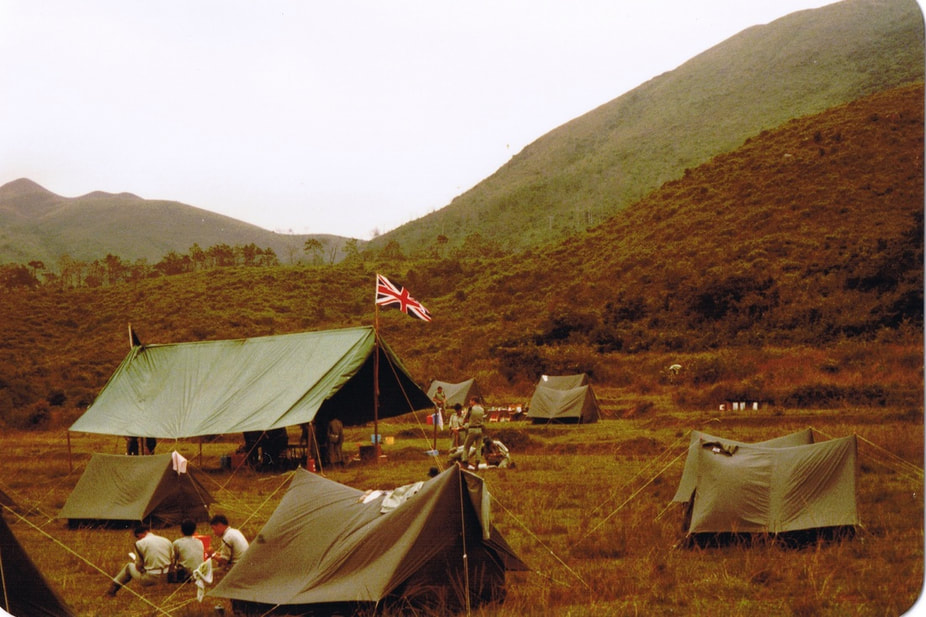 Ko Tong, Sai Kung.
​A notable milestone of the course was the one-week leadership camp in rural Sai Kung at Ko Kung. At that time, parts of this area were still closed to the general public for security reasons.

I was assigned the task of arranging the food for 20 odd colleagues.

Our arrival in the exercise area was all clandestine. In groups of four, we deployed in the darkness to navigate to the campsite using compasses. Some of my colleagues were uneasy at being in a rural area at night, with little light and not knowing our position. Snakes and wild boars added to the fun.

For some, this is the first time they'd been out at night, away from the urban area, with the accompanying light. It unsettled them.

My adventure training kicked in. Taking a compass bearing, I orientated the map to work out our approximate location. We soon identified a stream,  found a road, and made our destination at Ko Tong within an hour.

It was only about 10 pm, so the instructors sent us out to guard a nearby bridge until the others arrived, stating terrorists may blow it up. Unfortunately, as we moved into position at the bridge, I tripped over something lying next to the road.

"Good evening, Sir" a Gurkha soldier prone on the ground, camouflaged with his rifle at the ready, gave me a smart salute.

Then through the darkness, I noticed about eight silent figures laid out in an ambush position around the bridge. None had spoken until I'd tripped. This was one of the several encounters we were to have with the wily Gurkhas in the coming week.

They went about their business of catching illegal immigrants while we played at leadership. Then, finally, we went back to the campsite, suggesting that the instructors don't arrange a mock attack on the bridge.

The leadership camp was straightforward for me. Making sure the food was available and resupplying people with water.

That week was my first exposure to the wilds of Hong Kong. Most people have an image that Hong Kong is all crowded streets, bustling markets, skyscrapers.

That's one side of the place. The other is hilly terrain, remote islands, beautiful isolated bays with aqua blue waters abutted by people-free beaches. Even on Hong Kong Island, it is possible to escape to the countryside, leaving the city behind.

The final evening of the leadership camp called for a celebration. I'm dispatched to get beers and set up a BBQ. In the failing light, a few games developed, including a tug of war—instructors versus the trainees.

In the approaching darkness, without notice, someone tied our end of the rope to a tree. With my colleagues in on the joke, we made a show of pulling, as the tree did the actual work. But the instructors were losing face, as they were unable to budge us.

Suddenly an instructor realised what was happening. He came barreling down the line yelling about cheating. Next, he pushed a Chinese officer to the ground, taking a kick at him as he went down.

​Before I knew it, I'd taken a swing at the instructor. Then all hell broke loose, with instructors and trainees in a massive melee.

Things eventually settled down. I sat dejected on the ground, awaiting the repercussions for belting an instructor. Nothing happened. We are all sent to bed without so much as a comment.

The next day, a subdued and tense mood hangs in the air on the bus heading back to PTS. The local officers reckon I'd face discipline, and at worst, get kicked out. I was ready for that. Despondent prepared to accept my fate. I'd state the facts; I'd acted to defend a colleague.

On arrival back at PTS, an instructor called me over. Here we go, I thought. "Kai Tak rules", he stated. I'm baffled.

I'm taken aback and relieved. The guy I'd hit was awaiting promotion. So any nonsense that occurred on camp could have backfired on him, delayed his rise or even stopped it. Put it all down to high jinks and say no more.
passing out