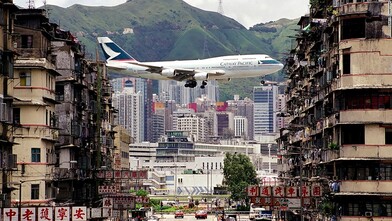 I met people I'd be training with as we boarded a British Caledonian Tristar for the flight to Hong Kong. We were an odd mix. Former UK cops, a few graduates, an Irish lad is running away from a broken marriage and one public schoolboy. He'd only turned 19 that week. The oldest in our group was 29. Unfortunately, he did not survive the course in Hong Kong.

​My memory is hazy about the route we took eastward. However, I recall a stop-over in Calcutta that had us all keen to get back on the plane with its air-conditioning. A taste of things to come.

For the landing in Hong Kong, seated at the window on the plane's right side, Kowloon flashed past. My jaw-dropping introduction to Hong Kong is the bottom-twitching Kai Tak Runway 13. Even the runway number gets you worried.

The buildings kept getting closer and closer; then, of a sudden, we appeared to be flying between them. We banked hard right for the lineup. I could have reached out to touch the people, cars and tenements. Instead, we skirted the aerials of Kowloon City, levelled out and then landed with water on either side of us.

​​The legendary landing at Kai Tak never ceased to take my breath away. I was fortunate enough to experience it many times before Kai Tak Airport closed. I was there that evening in 1998 when it fell silent. With a lump in my throat, the landing lights faded for the last time.

Exiting the plane, the Airport Duty Inspector was waiting for us. This moment was our first encounter with a Royal Hong Kong Police officer in all his finery. He came kitted out in the dark blue winter uniform, black Sam Browne and his cap brim down over his face.


"Bloody hell, he looks like a Nazi" was my first thought.


"Good afternoon, Gentlemen. My name is Hans Barkell-Schmitz. Please give me your papers."


I'm now confused. The clipped Germanic tones caused us new arrivals to hand over our passports in awed silence. Had I joined some the 'Boys from Brazil' outfit? Han's German routine slipped as he led us through the Airport and out to a waiting bus. Barkell-Schmitz is British, although with German ancestors. Han's used his Gestapo routine on all arriving recruits to significant effect.

We learned later that Hans was something of a legend in the RHKP. He'd once jumped into the harbour to arrest the crew of a fishing vessel that had entered the exclusion zone around the Airport. Most officers would have called for support from the Marine Police. Not Hans! Our paths were to cross later.

He handed us on to a Kevin Biggleswade, who had arrived two months before us and was thus in the squad above. Kevin was a Northerner with a pronounced Lancastrian accent. "You're alright, lads?"

The ride from Kai Tak to Wong Chuk Hang on a bus without air-conditioning was a rude introduction to the heat. Unfortunately, that heat stayed with us until October. But the discomfort eventually went unnoticed.

​Unfolding around was a colourful street scene of crowds, traffic and noise. This place is alive and jumping.
​
A smell hit the nostrils. Air heavy with moisture; a dank aroma akin to washing pulled from a spin-dryer yet tinged with diesel fumes. We drove through the harbour tunnel to Hong Kong Island, transfixed by the hectic traffic.

As the bus hauled its way up Stubbs Road, I looked back in awe over Happy Valley. Tower blocks, jostling for space. Beyond that, the harbour alive with vessels, then through the haze sat Kowloon.

A backdrop of mountains ran east to west. Yet, I knew that somewhere in the distance, not too far away, was China proper. A China that was about to emerge and challenge the world order.

In the Shadow of Brick Hill

The Police Training School (now the Police College) nestles at the foot of Brick Hill, sandwiched between Wong Chuk Hang and Ocean Park. This place was to be home for the next nine months.

The first evening was introductions in the Officers Mess. Served beer (spiked with vodka), things started to spin. Senior squads traditionary ran an initiation for the new intake. Ours was tame. A previous induction resulted in one dislocated shoulder plus various other injuries. Since then, the brakes have been on.

Next came the obligatory bar tour of Wanchai. In those days, Wanchai was on a downward spiral. Jaded and tired, it hadn't recovered from its hectic role as a rest and recreation centre for the US military. The Vietnam War was over, yet many of the worn-out ladies hung around with downcast eyes.

Jet-lag, coupled with far too much alcohol, soon took its toll as I drifted off on my bar stool. In no time, we were back in Aberdeen, desperate for some rest.

'J Block' was our spartan home for the next two months. We occupied the ground floor, with ten lads to a room, no air-conditioning. The small blessing was a clunky ceiling fan that helped keep the warm air moving and the flies unsettled.

My mattress smelled like it had seen a lot of action. I didn't fancy sleeping on it with only a cotton cover to protect me from unknown life-forms living there.

The first few nights in 'J Block' were sleepless, sweaty, restless affairs. I struggled to stay cool and to keep the mosquitoes at bay.

​We burnt anti-mosquito coils all night, slathered ourselves in repellant, and all to no avail. So welcome to Hong Kong; a soaking wet mattress and a pale body covered in mosquito bites.

And this was just the start.
first week