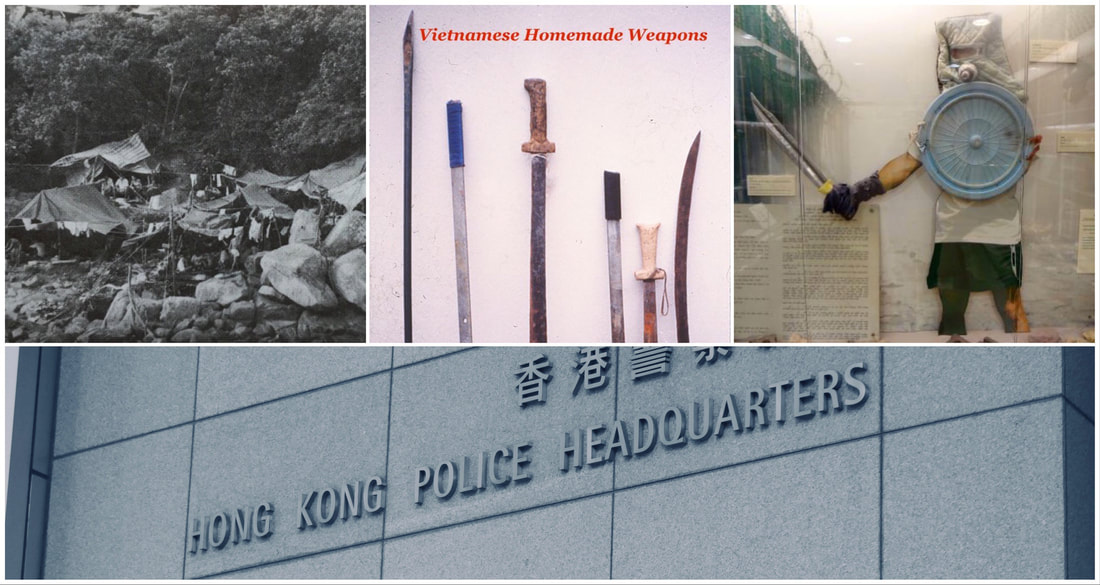 In June 1989, I took command of the Force control room, now renamed HQ Command and Control Centre or HQ CCC. Housed in Police HQ on Arsenal Street, it hadn't changed much since I'd served there in 1983/84. But, except in preparation for 1997, military involvement was on the wane. We still had Royal Air Force personal in place, but the other services had withdrawn.

I arrived a matter of weeks after the events of 4th June in Beijing. As public sentiment flipped overnight, confidence in the future of Hong Kong waned. Many discussed leaving.

In a massive outpouring of emotion, people took to the streets. The police were deemed to have handled the crowds adroitly. In truth, the people policed themselves, and we only acted to ease the traffic flows. No one was going to intervene to hold back the protest.

As the marchers passed the New China News Agency in Happy Valley — the seat of Mainland representation — they chanted "Thank You, Police." That was probably the last time Hong Kong people acted in unison. Within decades, a polarised society saw the police vilified by some.

Being familiar with the workings of HQ CCC, I eased into the job. My day-to-day role entailed managing the Police Duties Officers — PDOs and making us ready for emergencies. Updating actions cards and contingency plans proved a constant effort.

A small team of civilians, including communication specialists, worked with us. In those days, we still operated telex machines and encrypted faxes. Within two years, computers would replace the lot.

I answered to the Superintendent Operations and above him the Assistant Commissioner Operations. Both left me alone to get on with the job. Although a significant incident would see them on 'The Bridge' - located behind the control room, 'The Bridge' was on hot standby as the Commissioner's command post.

It was fortunate I knew the ropes because, within weeks, we went on an emergency footing. On 23rd July, at the hastily constructed Shek Kong Detention Centre built, trouble flared. Four police officers and 100 Vietnamese sustained injured in running battles between factions. One man died when attacked by other Vietnamese refugees.

We scrambled to turn out reserves, arrange support and ensure manpower was available. A protracted incident looked likely. The Vietnamese had fashioned hundred of weapons from steel poles and metal tent pegs. Acting in unison, they proved a formidable group. In the following days, officers conducted repeated sweeps recovering these weapons. By 26th July, calm returned. This fighting was a foretaste of events to come.

In the early 1980s, the fishing communities abandoned Tai A Chau Island on Hong Kong's western boundary. Then, as the influx of Vietnamese refugees gathered pace, the overwhelmed government struggled. Hence, Tai A Chau became a massive clearing station for the Vietnamese.

Most of the Vietnamese remained in the bay on rickety boats awaiting clearance. By the summer of 1989, the number was an estimated 4,500. Cholera soon broke out as a contingent of Marine Police attempted to maintain some order.
​
On 27th August 1989, the Vietnamese attacked the police. Overwhelmed officers retreated on police launches as fighting broke out between the Vietnamese. In HQ CCC, we strived to get a picture of the unfolding events. But, as darkness fell, fires were burning, and screams suggested the fighting continued.

Overnight a plan came together to retake the island the next day. The military made landing craft available while RAF helicopters stood ready. A nearby island acted as a staging post; as we ferried the Police Tactical Unit into position. All available police boats cordoned Tai A Chau. My team and I worked to bring together the various essential support services.

PTU 'Alpha' Company landed on the Tai A Chau beach from a military landing craft in a coordinated action. At the same time, other officers dropped by helicopter on the high points. Any resistance soon eased. With the island back in police hands, we now had to feed everyone. Sending food by boat could take hours. I was pushing the Civil Aid Service to act.

Then the Force Catering Officer called me with a plan. I rang the manager of the McDonalds in Wanchai to ask could he take an order for 300 'happy meals'. He replied, "Sure". So we soon had drivers collecting the meals for dispatch to Tamar. The RAF then picked them up in batches.

​We kept that air-bridge open for several hours until mobile kitchens arrived. In the end, over 600 McDonalds meals flew to Tai A Chau. Police canteens also provided rice boxes as a logistics operation fell into place.

Tai A Chau faced a clean up with the provision of accommodation blocks, sanitation and kitchens. The police had offices on-site with a large pier built to berth vessels. Tai A Chau served as a detention centre until 1998. Later in my career, I went there for weapons searches, and once the Vietnamese left, it became a training ground.

Throughout the long hours in HQ CCC, Raymond, our barrack constable, supplied us with coffee and gossip. His contacts included secretaries and drivers. These people fed us with the latest rumours; who's in favour and who's fallen foul of who. In the days before WhatsApp, these parallel communication networks kept us briefed. As a result, we soon earned the nickname' rumour control.'

Barrack Sergeant Foo was at the centre of this web of informants. He held court in the basement of Caine House, controlling the labourers and cleaning staff. His tentacles spread through every corner of Police HQ and beyond. Bizarrely, his office homed a variety of birds, reptiles and a couple of snakes. The Zoo was something to behold.

Foo Jai held sway over his seniors because he was their 'mister fix-it'. You need a car repaired or a table booked at a specific restaurant; Foo Jai had the contacts. A bit of a touch-up of the paint at home or a new suit, Foo Jai could arrange that. Plus, his Christmas party was a must-attend event.

For reasons I don't understand, Foo Jai took a shine to me. This relationship eased several difficulties, including getting help at short notice. Foo Jai came under Support Wing, and as Operations Wing, I'd need to ask them to deploy his staff.

​That meant going up and down the chain of command with all its petty politics. "Put that in writing, please" is the typical response. Our relationship circumvented that nonsense.

We also faced grand-standing officers seeking to get their names in lights. Each day we wrote and circulated the daily situation report — Sitrep. This document detailed the significant events, crimes and other incidents of the last 24-hours. Strict criteria dictated the contents.

​Its circulation went as high as the Governor; thus, ambitious types pressured us for a mention. I fought a constant rear-guard action against a group of CID officers who felt they deserved the spotlight. But, of course, when their operations went wrong, they'd be scrambling for us to remove details.

The PDOs, who wrote the Sitrep, were all recently returned from leave. They'd completed one three-year tour. I had them for six months on 12-hour shifts, and then we helped get them a posting of their choice. That was the deal.

These young men, all expatriates in those days, carried much responsibility. Plus, they could make or break a career. So their choice of words or inclusion of detail had ramifications.

​Describing an entry to premises as 'the officer's forced entry' instead of 'the officer's entered' could raise questions. 'What authority did they have to break in?'. As I pointed out to many, "Be nice to my officers; they can damage your career with a sentence."

Also, the regional control rooms deferred to us despite a superintendent commanding there. Rank didn't count for much because closeness to the throne carried inferred power. The PDOs also found themselves answering to senior government officials. Thus, I needed confident types in the role. Personnel Wing gave me the first pick of officers returning from leave; hence, I got the right people.

New PDOs underwent a couple of days of familiarisation before flying solo. Then, on the second or third day, we'd play our initiation game. At their arrival briefing, I'd given them a code-word. Told if they receive this code-word, they must open the safe immediately and verify with a reply code-word to the caller. They'd then receive further instructions. Again, I emphasised that this is time-critical as it meant something of significance was happening.

With everyone primed, we'd start the code-word call. The officer then scrambled to recall the safe combination. Simultaneously, we'd have the six hotlines on their desk ring. In my office, I hear a symphony of telephones ringing, and then the painful cries for help "Boss, boss, Jesus Christ, help!".

With hotlines ringing, a safe combination to recall and juggling other tasks, they're soon overwhelmed. After a suitable interval, I'd arrive to demand, "Get your safe open, and confirm the password." With fumbling hands, the opened envelope reveals 'Mr Jones, Welcome to HQ CCC'.

This fun had a purpose. At times of crisis, the PDO telephone panel lit up like a Christmas tree. They needed to set priorities and reject non-urgent matters. Anything involving life came first.

A couple of PDOs plotted their revenge. I arrived early one morning to find a Sitrep full of lurid details. I bolted to the control room. "Who puts this out?". The incoming and outgoing PDO smiled. "Look at the date, April fools". I gathered the copies of the spoof Sitrep for the shredder. Then, as my blood pressure returned to normal, I sulked off to my office. Bastards.

From time to time, we ran exercises that involved manning up with extra staff. These could run for days, which meant I'd be sleeping in the office. Exercises can never simulate all the parameters of actual events, but at times, they feel genuine. For example, after a three-day stint on an anti-riot scenario, I stepped outside to find the streets peaceful. It took me some time to adjust.

Then confusion could follow if exercise protocols aren't followed. In one instance, the bomb disposal unit deployed to a reported device in North Point. No bomb existed because the incident was notional play in a command post-exercise. Someone failed to prefix the tasking message with 'Exercise Wingate'.

Likewise, actual incidents needed a prefix 'No Duff'; otherwise, confusion reigned. I frequently found myself asking the question, "Is this real or exercise play?". It could get mixed up at times. You start to understand why military exercises have the potential to go hot.

The graveyard shift in HQ CCC had young single inspectors alone with young ladies from the communications teams. The inevitable happened. I received a call from a senior asking.

"Who was the duty PDO last night?".

"Very good, could you ask Mr Rogers, does he intend to marry the lady?".

"Just ask him that".

He'd wandered in on supervisory patrol to find Mr Rogers and his comms assistant in a romantic embrace.

​Surprisingly, he'd retreated, not wishing to cause embarrassment. They'd not noticed. I advised a chastened Rogers to get a room in future.

In the iconography of the Hong Kong Police, all the attention falls on the officers with guns. The SDU ninjas, the PTU and the Emergency Unit. And yet, HQ CCC was more exacting and fun.

It remains a pivotal part of the Police Force, ensuring public safety. These days young confident Chinese officers have stepped up to the plate. The technology is much more advanced; the role is the same.​