The Life of Brian - "Blessed are the cheesemakers" 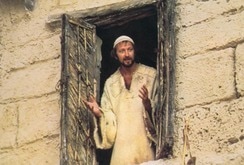 Controversial, hilarious, pretension popping, silly at times and yet thought-provoking. The Life of Brian pushes so many buttons. It's targets are many, with organised religion firmly in its sights. In the process, it delivers comedy gold … ‘but don't worry too much about the myrrh next time’. It’s Monty Pythons finest work.

Brian Cohen is born in a manger next door to where Mary is giving birth to Jesus. This is one of many unfortunate coincidences that lead Brian into all sort of bother. Including with the occupying Romans. He joins the underground ‘People's Front of Judea’ or is it ‘Popular Front of Judea’ … anyway. He gets mistaken for the messiah, has a ride in a spaceship (lucky bastard). Along the way, the film makes fun of freedom fighters, the Romans and bartering. In the closing scenes, Brian joins in a jolly sign along as he and others get crucified.

The parallels to the life of christ had organised religion decrying the film as blasphemy. Their sheep-like followers joined in, mirroring the satire dialogue in the movie.  Many of the critics had never seen the film. They parroted claims given to them by campaigners like Mary Whitehouse. In response, the Pythons debated the movie on TV with a leading church official.  The Bishop of Southwark came across as an intolerant unchristian sort.

Then is was revealed he’d never seen the film. His closing remark that the Pythons would ‘get their thirty pieces of silver’ opened him to ridicule. It later turned out the Bishop was closet homosexual with supernatural beliefs. So much for adhering to the doctrine of the church.
​
Much of the overhyped criticism of the movie affirmed the false virtue of organised religion. The film continues to attract criticism. Whatever. The zealots will never give up. “He's not the messiah, he's a very naughty boy!”
Next Page