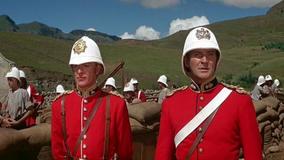 The British never looked so British as in Zulu. Based on the actual 1879 Battle of Rorke’s Drift, this 1964 classic captures all the intricacies of the class system.  Military ranks and the hubris of a colonial power are here, as 150 Brits face off against 4000 Zulus.

The young infantry officer leading the aid station finds himself outranked by an arriving engineer officer. New boy Micheal Caine summons up a pukka upper-class accent to play the infantry Officer. Mature and steady  Stanley Baker is the engineer officer. The two bristle against each other but hold their differences in check to lead their men. Private Hook is the rogue lad who comes up trumps. He leads the defence of the hospital.


​The set piece battle scenes use real Zulu’s. Thundering along as thousands of shields get rattled and feet stamp. The defences of the compound are overrun gradually.  Until the soldiers make a last stand with volley fire decimating the Zulu ranks. In the final scene, the Zulu’s sing the praises of their enemy and melt away.

A few historical inaccuracies are evident. The red uniforms were actually brown. Whilst the supposed Welsh troops were more likely lads from Warwickshire. Hook is a real person and by all accounts an exemplary soldier. He was teetotal and rose to the rank of sergeant.   The final dawn attack did not take place. Most of  Zulus had moved off at night as a British relief column arrived. And certainly, no singing took place, which is a shame because that’s the best bit.