The Afrika Korps and other tribes 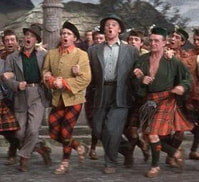 Burns Night in full flow
The Expat coppers of the Royal Hong Kong Police didn't come in one flavour. Although I suspect the public may have seen a uniformity that didn't exist. There was no common background or template for these officers except possibly a thirst for excitement and adventure.

I should point out that recruitment from overseas stopped in 1994, and even then, the term Expat didn't just cover white guys. These officers came from all races, cultures and classes; public schoolboys, working-class lads from Hull, rich boys on a retainer, and men on the dodge from some indiscretion. Also, recruitment stretched across the Commonwealth.

A fair number of Chinese brought up overseas joined as Expats. A thick Glasgow accent gave away one officers roots. What defined this group as different from local recruits is conditions service. While the pay was the same, the overseas officers enjoyed generous leave, travel allowances and housing conditions.

Within the force, you could see loosely formed groups with common identities could be identified. As the last embers flickered in the fire of the British Empire, Hong Kong gathered a few lingering colonial types. As I joined in 1980, one distinct group was the Afrika Corp.

As the name suggests, these men came from former African colonies. Most landed here as their last colony folded. This lot were a mixed bunch. Some I found to be extremely capable, having a great deal of experience under their belts. Also, they understood the organisational culture, although less so Hong Kong society. But, on the other hand, a few carried with them bigotry from former times and places.

The Afrika Corp arrived with their ranks intact from previous postings. No basic training for them, and few bothered to learn Cantonese. Lumped together with the Afrika Corp came men from Malaya, who'd seen action in the emergency.

Some of the Afrika Corp had in tow a memsahib. These dowdy women pretentiously adopted the rank of their husbands. One or two carried 'airs and graces' above their background, only to be caught out when relatives visited from Manchester or Doncaster. Pretending to be grander than you were was a tricky business as the world opened up.

Switching accents to fit in was not unusual and contrived accents worked in both directions. A few tried to posh up. In a reversal, one posh boy adopted the 'Sweeney' tone of speech, much to his parent's horror. "Peter doesn't talk like at home."

Before the days of social media, a man could fabricate a past without much fear. One chap claimed membership of an elite regiment. Everyone was impressed. Then his story evaporated when a former girlfriend visiting Hong Kong let slip he'd served in the British Transport Police.

We had some ex-UK police officers. Most were under 30 had limited service before opting to give Hong Kong ago. Some didn't take to the Hong Kong style of policing and opted out during training; others went to successful careers. Again, no pattern there. It all came down to the individual.

The Scots made up a substantial sub-group. They gained a reputation for hard work and tended to be less arrogant than the English. This trait endeared them to the locals. They also looked after each other. Like all displaced Celts, they exhibited more muscular attachments to their 'Scottishness' than when at home.

​A few earned the joking title 'faux-jocks'. Born away from Scotland, with loose parental connections at best, they still embraced the place as their home. Burns Night saw their biggest gathering of the year. Dressed like extras from' Brigadoon', the whiskey would flow. The highlight comes in a speech to a sheep's stomach stuffed with offal. It's a great night.

In the early days of the Hong Kong Police, the Irish were well represented. Less so during my era. Nonetheless, what they lacked in numbers the Irish made up for in their antics. 'Green Leader', a senior Irish officer, was well known for requesting "Steak and Kidney Pie without the Kidney".

You also had to question the level of recruit vetting. One lad from Northern Ireland had an uncanny knowledge of petrol bombs. He knew which bottles worked best, plus the length of taper needed. When pressed, he admitted to having had a few run-ins with the RUC. Nevertheless, he proved an excellent anti-riot instructor.

Australians, Kiwis and Canadians attested to the recruitment from across the Commonwealth. Even South Africans and Rhodesians put in an appearance.

By my time of joining, the recruitment of Expat ladies had stopped. Whether an official policy, I'm unsure. A few girls taken on in the 1970s and earlier remained in service. All were tough, professional and didn't take any bullshit. However, the training didn't favour the prim and proper, and operations certainly didn't.

Ultimately the Expat cops were a self-selecting group with broadly similar outgoing temperaments and a lust for something different. Why else travel halfway around the world to an unknown land to take on an odd job. Cocky, confident and gregarious traits abounded. The RHKP was no place for the weak or quiet sort.

The local officers proved stoic in the face of these over-confident Expat types. However, I know that some accents proved a challenge for them.

I'd be pulled aside after briefings by a Scot from Dundee. "What did he say?" I had no clue.