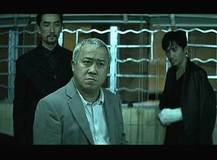 The first Hong Kong film on the list. Sometimes confused as ‘Internal Affairs’ this 2002 spawned the Hollywood copy. ‘The Departed’ directed by Martin Scorsese is less ambiguous. Thus for me, the original is superior.  It exploits better cinematography, builds the tensions and is obscure in its ending. Scorsese dumbs down the whole thing drawing clear black and white lines. Jack Nicholson's turn as the gangster also detracts. His performance is comical, reminiscent of 'Batman's' Joker. Having said that, for the China market the ending was less imprecise.

Both the Hong Kong Police and a triad gang place moles in the organisation of the other. Inspector Lau is the mole in the police, whilst Chen is a police mole in the triad. Over a 10-year period, the work of these two plays out in a series of raids, arrests and dark deceptions. The twists and turns are too elaborate to cover here. Except to say each side realises they have a mole with the race on to identify the person. Chen suffers terrible stress from his undercover role. He starts to exhibit signs of post-traumatic stress disorder.

Meanwhile, over time Lau decides to end his career as a mole. He seeks to eliminate his triad boss and cover his tracks by deleting records. The question remains is he turning over a new leaf or is some other plot unfolding. He succeeds only to have Chen discover his true identity.

There is a subplot involving romantic interests plus a fair amount of heartbreak. Besides a few minor errors, the settings and police procedural elements are accurate. Although the timings and pace are accelerated for dramatic purposes.

I won’t tell you the ending. It’s dramatic. Right up to the last seconds the convolutions play out with tight editing adding to the impact. I had to go back for several viewing before all the links fell into place.