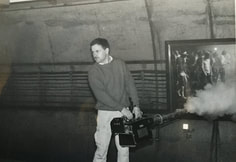 Causeway Bay MTR Station - creating chaos.
The Emergency Unit has all the fun. Not much paperwork, charging around, blue lights flashing. Get in, do the job and then leave; somebody else deals with the detail and the mess.

EU respond to the more serious '999' calls. Robberies, burglary in progress, gang fights - that's the game. Response times demand a quick on-scene arrival. Its adrenaline pumped through the radio from regional control, then inflated with a blue flashing light and sirens. EU don't travel slow. Plus, the EU doesn't loiter; if the case proves minor or resolved, it's bye! Back on patrol, waiting for the next call.

Based in Ngau Tau Kok Police Station - my unit covers Kowloon East - the Airport, Sai Kung and Kowloon City. As fate would have it, the Superintendents in charge rotated in my 16-months with the unit — three excellent leaders passed through. Each is supportive and hands-on.

Also, the EU enjoys getting the pick of officers from disbanding PTU companies. Everybody is hand-picked or a volunteer. There are no pressed men in the EU. With excellent esprit-de-corp, this is the place to be. Comradeship hangs in the air.

Unfortunately, I only get a short stay commanding a platoon. Then, after two months, I'm dragged, kicking and screaming indoors. The boss appoints me his headquarter's inspector. I'm to act as his adjutant. The role covers training, the armoury, staff selection and operational readiness. I still deploy for the more prominent cases, but most of the day is now desk-bound. Bugger.

Supporting me is a competent team headed by an indomitable Station Sergeant. Mr LAU proves a staunch ally as we tackle various issues. Always ready with wise words of advice, he didn't flinch from correcting me.

"Can I have a word, Sir?" He'd enter my office, closing the door. This approach was the sign that I'd better listen. Mr LAU never let me down. His sage advice was priceless.

With the rapid turnover in the unit heads, I'm appointed to act as a Chief Inspector. The Force is undergoing a rapid expansion and restructuring that's creating promotion opportunities across the board. Supervisors at the chief inspector and superintendent rank are moving onward and upward at unheard of speed. So I'm handling two jobs, although content to have the freedom. No one is breathing down my neck for results.

Then in a steady escalation, we deal with more and more gun crime. Kowloon West is suffering badly, less so Kowloon East. Stick grenades also put in an appearance — a worrying development.

Working with EOD, we develop tactics for responding to the grenades. I'd never envisaged having to think about this. Most of the grenades surfacing in Hong Kong are 'potato masher' Type 67. These are crude yet very effective.

Soon I'm working as part of a roving training team briefing officers across the Regions. The tactics are nothing sophisticated. It's all about taking cover, using solid structures and the terrain. Even dropping down beside a road curb could get you out of the blast and fragmentation spread.

​Officers are taught about fragmentation skipping on hard surfaces. We coach them on dropping to the ground, with legs towards the grenade - shrapnel in the legs is preferable to getting it in the head.

The training would conclude in the station compound. Armed with mock grenades, we had officers scrambling for cover. It was all fun but deadly serious at the same time. A few years later, an SDU officer lost an eye to a grenade.

Chinese New Year tended to see criminal activity drop off. The pace relaxed a little. Near Chinese New Year 1988, I arrived at work to find Mr LAU waiting with a severe expression on his face.

"Daai wok", he muttered - a rough translations' big trouble.' He handed me a Chinese newspaper. Spread across the front page a series of photographs — one of our Falcon EU Cars parked with the crew playing cards. Visible in the pictures were three constables. The car commander, a sergeant, couldn't be seen. While the car number was not visible, the location on Devils Peak told us the culprits.

"Get the car back here now." In a matter of minutes, I knew the telephones would be ringing. With the boss away on leave, I'd be catching the flak.

Some 20 minutes later, I'm waiting in the compound as the car returns. The crew is the same as the previous day, and they're looking sheepish. I order them off the vehicle, as Mr LAU starts a search of the car. Bingo, we found the playing cards and a set of dice. Fortunately, the clowns hadn't had the sense to realise what was happening and dispose of the evidence.

Later regional HQ called demanding answers. I'm able to report action is underway with the culprits identified and the gambling kit seized. That defused any immediate allegations of a failure of supervision.

The sergeant tried to escape the discipline case by alleging he'd left the vehicle to go for a pee. He wasn't in the pictures, and the other officers remained silent. Finally, I removed him from the unit. He'd broken one of the cardinal rules of leadership by letting his men take the flak. His career was over. After that, he wallowed in a series of less appealing jobs before taking early retirement.

The Emergency Unit shared its headquarters with the MTR District headed up by crackerjack leader Jamie Clements. As an ex-PTU instructor, Jamie and I are kindred spirits, and he drew me into his exercises, testing the competence of his staff.

The evening he allowed me to fill Causeway Bay MTR station with smoke to simulate a fire was memorable. Using pepper fog machines, I soon caused chaos. The Fire Brigade, police and MTR staff were expecting an exercise but nothing of this nature. They stumbled around, disorientated in the labyrinth of corridors and stairwells. Confusion reigned. I thought I'd made my point when the MTR engineers did their thing.

Without warning, all my smoke disappeared down a tunnel. Then the engineers shunted it back and forth in an impressive demonstration of the ventilation system. Once back on the surface, the exhausted fire chief looked me in the eye.

"Was that your idea?"

"Partly, Mr Clements can also take some of the blame", I muttered, awaiting a dressing down.

Jamie went on to excel with another exercise. He acquired an old double-decker bus, then inserted a crashed van on the upper deck to simulate a vehicle falling off a flyover. Again, the faces of the responding officers was a sight to behold.

In late 1987 I'd appeared on a promotion board. I got wind that I'd made it, although never believe it until you receive the formal letter. In February 1988, I was assigned to Kowloon HQ as a Chief Inspector.
Drugs, Broken Kids & A Crashed Plane