A Pub in every station! 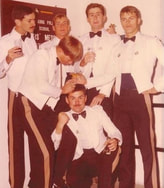 The young colonial boys.
“Every Police Station has a Pub” so concluded my sister.  And she’s not wrong. It's true that Messes played a pivotal role in Police culture, although these days the influence, good and bad, is waning.

It’s irrefutable that the colonial Brits took their customs with them as they strode across the world. Socialising in the Officers and NCOs Mess, proved a resilient feature. There was a cost. The Oxford Survey of the British Empire, published in 1914, cited alcoholism as the top ailment. Not snakes, tigers or malaria, although they took its toll. It was self-inflicted behaviour that culled many.

Even as late as 1980 graduating officers could be assigned to live in a Mess. The officer worked and resided in the same place. This gradually changed except in the more remote places. Lantau and parts of the New Territories continued the practice until the late 1980s. Improved transportation, accompanied by the provision of quality housing down town heralded a change.

Even today, the Hong Kong Police Messes are active, woven into the fabric of the organisation. The role played is diverse, evolving and not without its detractors. Officers get to relax away from the public, able to let off steam. The Mess is used for community functions and as a training venue.

It’s worth pointing out that Police esprit-de-corp gets forged through alcohol-fueled bravado. The Mess provided the ideal setting for officers to let their hair down. Young men, its always men, full of dash and energy, need an outlet. Most of the alpha males revelled in Mess life; the author included. The ladies, not so much.

The importance of the Messes retreated around the reign of Commissioner TSANG Yam-pui. Whether directed by him or a sign of the times, some Messes closed as the drinking culture dwindled. Although soberer, the bonds forged late at night in Messes eroded. Drink driving laws, plus the drive to professionalism, with a healthy lifestyle, placed Messes in jeopardy. Further, with fewer Expats around, the natural clientele was gone. But that does not mean all the locals shunned the Mess. Crime officers and specialist units keep an active Mess life as part of their ethos.

Messes have their own peculiar set of rules. On day one at the Police Training School, the first thing you learned is Mess etiquette. Dress codes, conduct and certain quirky restrictions get drummed home. No caps, no Sam Browne: no weapons. Don’t sit in the commandant's chair unless you wish to invite a fine.

An honour system exists for the payment of drinks and food. The Mess Boy, hardly an appropriate name for a 50-year-old man, kept a watchful eye on transactions. He’d tally up accounts at the end of the night to ensure the covering of missed bills. After all, in all the fun, it's possible to forget. If an officer failed to stand his round or absconded without signing, he risked his reputation.  In the absence of the Mess Boy, an officer must faithfully record his drinks. Failure to do so could invite scorn or worse.

“If I can’t trust a chap to sign his mess bill, how can I trust him with my back on the streets”  captures the conviction.

Mess events punctuate the weekly life of operational stations. The Wednesday or Friday curry lunch drew in everyone. Police officers, community leaders and hangers-on. Amongst the cops, no excuses for absences. Unless something urgent was at hand, this lunch was compulsory. Also, you’d better clear your schedule. It could extend into the afternoon and beyond.

In the past magistrates and senior court staff joined in. Prosecutors and the odd defence counsel would dine side-by-side. Good natured remonstrating abounded. In the remote parts of the New Territories, the local Magistrate could be found most evenings swapping stories at the Mess bar. Sometime in the 1990s, this came to a stop. An edict came down that such fraternisation with the police should be discouraged, on the grounds of fairness.

Of course, appearances are important. And yet, a communication channel was shut down. Perhaps that’s not healthy.

Maybe I'm biased. In my mind, the Police Tactical Unit Mess curry was the best. At a single sitting, 40 officers would woof down the best Pakistani curry east of Lahore.

Friday happy hours also brought together the entire command. Things kicked late afternoon. The hardcore would press on through the night. Others would slip away. To families or out on the town until Saturday, with some in a stupor covering Saturday morning. Hardly a Saturday passed between 1980 and 1984 when I didn’t wake with a hang-over.

Messes didn’t sit apart. The Mess was an integral part of the system. This role proved especially so at the Police Training School and the Police Tactical Unit. Within the Mess, the rank structure of the organisation gets reinforced and replicated. The Committee is rank based, with the senior officer sitting at the pinnacle. Spaces at the table are grade based. Likewise, when wives attended, they adopted the positions of their husbands. This bizarre practice caught my better-half out. Introduced to Mrs TO, wife of the training officer and then Mrs DC, spouse of the deputy commandant, she shrugged. “I suppose that makes me Mrs Inspector Training Team 2.”

Ma Gau, a cook-sergeant, presided over the Police Tactical Mess in the late 1970s and 1980s.  While the Commandants came and went, Ma Gau, claimed the place as his. He was not one for respecting rank. On formal mess nights, he could be found standing at the entrance to the dining room, directing the waiters. A large glass of brandy in hand, a destaining look on his face.

He’d invite himself into the bar. On occasions, the brandy got too much. Escorted away after insulting someone of rank, he'd exit. He could get away with rude remarks to inspectors and chief inspectors. Not Superintendents. Ma Gau’s passing got marked with much gusto. A few brandies and stories.

Certain Police Station Messes gained a reputation for machismo. “The Bugs Retreat” in Mongkok Police Station comes to mind.  Most nights of the week the bar would be held up by an assorted group of Emergency Unit, Traffic or Police Tactical Unit officers. This motley crew put the Star Wars Cantina Bar to shame.
​
For sheer elegance, the Wong Tai Mess beat most. The bar was recovered and refurbished from a cruise ship. Elegant dark wood, a touch of brass. It provided a serene, tranquil setting for lunch that contrasted the encroaching urban blight. Entering, you moved from one world into another. A few messes came close for such a transformative experience. Wong Tai Sin excelled.

It would be wrong to portray Police Messes as always welcoming places. The environment could be intimidating.  Misogynistic behaviour by dreadful bores was not uncommon. Certain sad individuals lorded it over younger ranks. Without a doubt, most of the ladies who turned up did out of a sense of obligation, not because they enjoyed it.

The Mess did have its merits. Young officers had the opportunity to vent their spline in what a 'safe space'. A wise commander allowed the convivial surroundings to loosen tongues.  In general, latitude was given to outburst. And in that sense, the Mess served a useful purpose. I’ve lost count of the occasions I took it upon myself to apologise the next day.

Usually, the reply “It the Mess, no problem.”

Some did overstep the mark. Making fateful comments, uttered through the haze of alcohol, could disrupt a career.

The Senior Officers’ Mess, also know as the ‘Great Hall of the People’ could prove a high-risk place to voice out your thoughts.

One notable incident comes to mind. A Chief Inspector, on hearing of his promotion, decided to speak his mind. He felt it would be a good idea to let the Deputy Commissioner hear his views. Thus, after a few beers, he held forth on why his promotion was overdue. Along the way, he called into question the integrity of senior people. Not done with that, he threw in a few insults.

Reminded that his promotion was provisional and subject to continued good behaviour, he stalled. Held in abeyance for a year he avoided the Mess for some time. There are limits to "What's said in a Mess stays in a Mess."

I suppose what made it fun was the banter. In the Police, I learned the value of a communal experience. Being part of a team, we worked hard, had a clear mission and then wound down together. We spoke a common language, knew the references and context. It’s our world. If you want to join, do the job, get the time in. Then, you’ve earned the right to judge.

To keep things in check, a belling was always on hand. Bullshit, inflated comments or downright lies could be called out by ringing the Mess Bell. The alleged culprit's statement would then be recorded in the Bell Book, with the senior officer present judging if a fine was appropriate. Usually more beers for consumption that night.

The bellee took a risk. Incorrectly calling out someone could back-fire with a counter fine if the statement was judged valid. Late at night, it all got a bit daft. Next day, reading the erratic scrawl, the antics didn’t always appear so funny. It’s a case of you had to be there.

Formal Mess nights started with a different tone. All formal, dressed up in Mess kit with speeches and toasts. The head-table piped in with the pomp that wouldn’t be amiss across the length and breadth of the former  British Empire. All stirring stuff. Then as now, the port was passed around, right to the left, as you served your neighbour. In turn, someone helped you.

Before 1997 its was glasses raised to the Queen. After, the toast was Hong Kong. For the most part, it enthralled the regulars and visitors. With an overpowering aura of formalities, people got into the swing of things. And yet, scratch the surface, and you’d reveal little of substance. New traditions, the faux genuflection, the over-compensating gestures to distant masters. The symbolism had its defenders as some took it extremely seriously. It's sure you couldn’t fail to be moved by Pipes. Beyond that, I’m not convinced of the meaning nor intent except it brought people together.

Later, after the formal events, games and silliness would prevail. Of course, no one would leave until the chief guest departed. The first to exit is the ladies. Next, the men would drift away. Some chaps would loiter chatting. A few would drink to oblivion before it all shut down.

Mess life continues. The regular long-afternoon drinking sessions have  abated. Sedate community functions and lunches are prevail these days. And few, if any, would welcome a return to old days. The boisterous heyday  fed on the period; colonial policing, single young men in search of fun. Those halcyon times are over, fondly remembered as echoes of another time. ​ 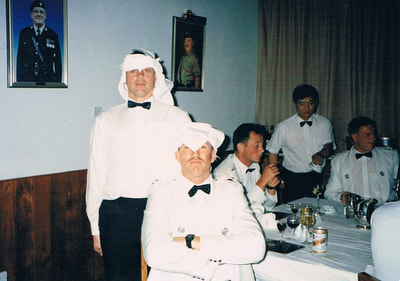 It was funny at the time. 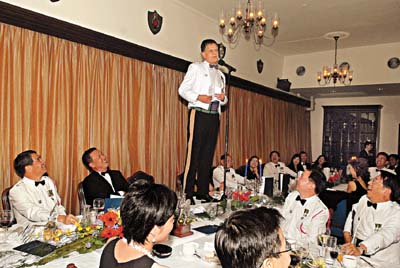 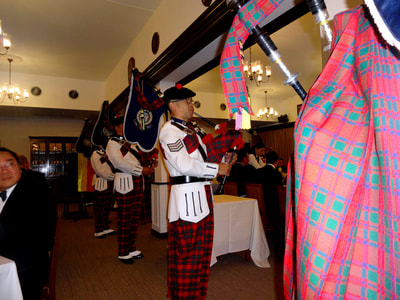